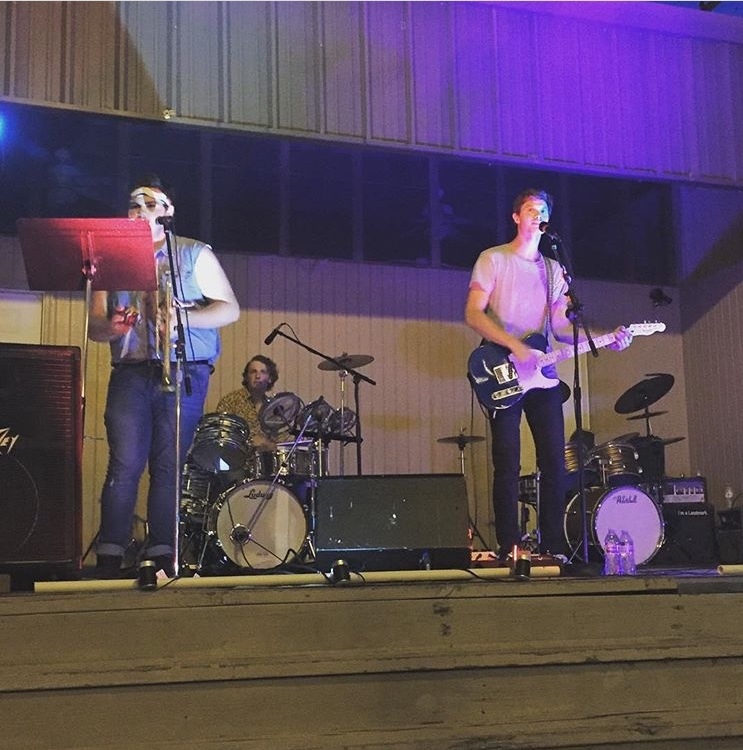 Ben, Kaleb, and Dalton had played worship music together prior to forming the band and loved it. However, after a while, “We just wanted to play our favorite songs we had been playing independently,” Ben admitted. Ben had been inspired by the bass player for John Mark McMillan, Jeremy Radio, who had just started a record company called Four Finger Records in Charlotte, North Carolina.

“They were just sort of doing what they wanted to do, and I was like, ‘You know what? I’ve always wanted Poteau to have a music scene. Like, I’ve always felt just so out of place. I do not have anywhere to go or anywhere to play or anyone to play my songs to.’” So, one day in March of last year, Kaleb was outside on the patio at The Coffee Cup writing a few verses for a song when Ben came outside and said, “I have this chorus stuck in my head. . .” and then proceeded to play it for Kaleb. Kaleb responded with, “I think I might have some verses that would go with that.” They combined Ben’s chorus and Kaleb’s verses and that day marked the beginning of the band and the creation of one of their songs, “Give Me A Try.”

On January 11, 2019, The Black Diamonds released their first single “Never Say Die” on Spotify. Thanks to a friend of the band and fellow musician Bryson Cook, “Never Say Die” leads with a few lines from the movie, The Goonies.

“I had heard their song before, and we were in mid-recording, and I was just like, ‘That reminds me of a line of The Goonies where they’re in this well, and someone’s, like, giving up hope and they’re like, ‘Maybe he’s dead! Maybe Chunk died!’ Then one of the kids is like, ‘Don’t say that! Goonies never say die! ’And I was just like, ‘That would be so cool to have it in the song . . . ’” Bryson Cook explained.

“It turned out perfect, by the way,” Ben said.

“Yeah, I was just like, ‘Hey, Ben! Listen to this!’ I looked it up on YouTube, you know, the sound bite of it and it just worked. It worked for the song,” Bryson remarked.

Ben then leaned in close to the microphone, “We are not trying to get sued by Warner Brothers,” he partly joked.

As it turns out, the song has nothing to do with The Goonies but has to do with love. When you’re young, you feel utterly invincible. You have yet to feel the brush of mortality’s fingertips, and everything seems new and fresh and wild. “Never Say Die” is about those feelings and emotions of being young and in love for the first time. The song details those moments where you feel like nothing can tear the two of you apart, but—sadly—hearts can change. In those moments together, however, you hold on tight; to that feeling, that love, and that person. When it ends, however, one can still look back on those memories and appreciate them for what they were, and that is really the purpose that “Never Say Die” was written.

The Black Diamonds plan to release an EP next and along with some trumpet on the tracks. Kaleb is supposed to sing on a song as well. “The next time we release something, it’s going to be a lot cleaner and better audio quality,” Ben remarked, “We’re going to track individual instruments. We’re gonna keep it as pure as we can, obviously. That’s the point. We’re a three-piece band. There’s no sense in us recording something that makes us sound like, you know, Bethel or Elevation Worship with, like, twelve electric guitars.” He laughed. “Obviously what we released wasn’t studio quality. Like, we literally set up microphones and just played.”

“Well, it was a live performance. That’s what it was.” Bryson said.

This [“Never Say Die”] was sort of us just, like, ‘We want to put something out. We’re just trying this; we’re gonna set a bunch of mics up and turn it up.’”

“It was definitely a homemade tape, but I think that adds to the point,” Dalton said.

“It definitely made it more special,” Ben agreed, “I wish the vocals were a little bit louder, but you can’t go back and undo that.”

“We didn’t want to give it to somebody and take a chance on it being way overproduced and just be. . .” Kaleb said.

The Black Diamonds have often played at The Coffee Cup in Poteau during Open Mic Nights, outside at the Pocket Park in downtown Poteau, and pretty much any gig that comes their way. “There are so many times that whenever we play a show; it’s my favorite thing. It’s why we decided to be a band. It was just to have that feeling. You know? I can’t explain it.” Ben said.

You don’t understand why you’re looking at each other, but you’re looking at each other, and something’s just right. You know?” Dalton said. “And that’s the thing about it, even if we don’t sound incredibly awesome, like, we get so much pleasure out of it and seeing other people get pleasure out of it, too,” Dalton added, “Like, watching faces. Even though, you know, they may not see it as big a deal as we do, it means a lot even to know that we have support and that people enjoy the things we enjoy.”

“When we played ‘A Wonderful Life’ by Bryan Fallon—I think it was here at the Coffee Cup—and man, it was just . . . Like, in my head I might as well have been playing at Wembley Stadium because everyone was on their feet and everyone was in it. We might have sounded terrible but I didn’t feel like we missed a note and everything was just, like, ‘Wow. This is it.’ That’s what I’m chasing.”

The Black Diamonds—along with Bryson Cook opening—are playing this Saturday night, the twenty-sixth, at 6:00 p.m. at The Coffee Cup! Come and support the band and get ready for a night of loud music and good vibes.