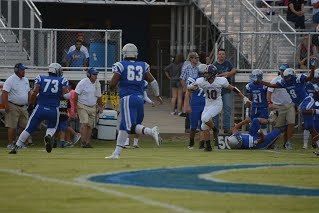 The Wolves played against the Haskell Haymakers last Friday night. Even though Heavener lost 30-7, they still seemed to have a lot of fight in them. Heavener held the score to zero after the first quarter against a strong 4A offense. Heavener gave up 260 yards on the ground, but held Haskell to only 56 passing yards. On the other hand, Jordan Terry went 6-18 with 101 yards through the air. The Wolves defense forced three turnovers in the game with 1 interception and 2 fumble recoveries. Heavener had its fair share of turnovers also with 2 interceptions and two fumbles lost. Jacob Hill rushed for 39 yards with 18 attempts. On the receiving end, Connor Place got 11 yards with 4 receptions, and Jack Duschel got 1 reception for 90 yards and Heavener’s only touchdown. Overall, the Wolves seem to have a lot of potential this year, and they seem ready to beat the Razorbacks this Friday.***Stats provided by Craig Hall, of The Heavener Ledger.